While I don’t see Hunger Games as “Team Peeta” vs. “Team Gale”, anyone who says  they never cast a mental vote for who Katniss should end up with is a Big Fat Liar. Since the biggest role many female characters in YA novels get to play in their own stories involves picking a fella (thankfully not so for Katniss), the love triangle is a go-to for injecting a little drama into the proceedings. Today I want to take a look at the love triangles in four YA novels: Twilight by Stephenie Meyer, Wicked Lovely by Melissa Marr, Sisters Red by Jackson Pearce, and Hunger Games by Suzanne Collins.

There will be many spoilers. If you have not read these books, and will cry if they are spoiled, please spare me the pain of making you cry.

Angle B: Bella Swan – new girl at school, reads gloomy books, thinks everyone who likes her is kind of dumb (including her parents).

Anyone who has read my prior entries reviewing three of the four Twilight novels knows that I think Jacob is the obvious choice in this setup (up until the character assassination). Jacob has both the “Bad Boy” archetype and the fact that he makes Bella a better person on his side. He is honest with her, respects her autonomy (again up until the character assassination), and helps her develop a social life with people other than his own relatives. Edward lies to her, ensures her compliance with his wishes through subterfuge and abandonment, and ensures a life of isolation by poisoning her and dragging her into the woods after chewing open her womb.

But hey, you know, different strokes.

Angle B: Aislinn – seer of faeries, skipper of school, hangs out in nightclubs and will probably acquire many tattoos and non-iron facial piercings over the course of her adulthood.

Angle C: Seth – gets around, statutory rapist, wearer of nail polish, may look like Trent Reznor, has already acquired many tattoos/piercings, lives in a boxcar.

Full disclosure: I have only read the first three books of this series, so all of this is based on Wicked Lovely, Ink Exchange, and Fragile Eternity. This triangle is slightly different than the Twilight configuration: the idea of fated love is mixed in with the immortality vs. natural lifespan quandary. Also the fact that if Aislinn doesn’t choose Keenan it will literally kill him and the entire Summer Court. No pressure. Keenan doesn’t really love her either, he’s still hung up on the Winter Girl, but he’ll do anything to save Summer (and rightly so, it’s my favorite season). There is really no reason whatsoever for Aislinn to choose Keenan romantically. Both he and Seth have plenty of other ladies to choose from, but Aislinn goes moony for Seth’s brooding artist in a boxcar bit. The whole love triangle is actually a lot less interesting than the question of whether or not Aislinn will take up the mantle of Summer Queen. As with Bella, it’s a bit of a foregone conclusion. Aislinn is choosing Seth, even if he is a lot more likely to give her Hepatitis C. 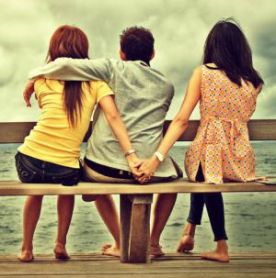 Angle A: Scarlett – Badass one-eyed hunter babe with an axe, as scarred on the inside as she is on the outside.

Here’s a triangle turned on its ear! Silas catches a peek of a freshly showered Rosie and suddenly he’s more interested in being the Big Bad Wolf than hunting them. Scarlett doesn’t even realize she is in a triangle until Silas and Rosie get a little too overt with the lingering glances, and is she competing for the guy or her sister? She doesn’t want to lose her sibling or her hunting partner, and part of her resents Rosie for being hale and whole (though it was Scarlett’s protection that allowed her to remain so). Silas may have two ladies for the choosin’, but it’s Scarlett who makes the final decision. She loves hunting more, everyone knows it, and Silas rides away with the booby prize: shut-in, underage, middle-school dropout Rosie.

Gale and Katniss are too much alike. They are destructive and angry…if each of them were an element they would both be fire. If they got together they would make a bigger fire and destroy everything! Neither has any real morality to speak of, only a utilitarian philosophy of survival that might permit a pairing. Katniss actually needs Peeta, he is her missing heart and soul. He is the earth to her fire, ever-present, able to let her burn or damp the flames when they burn too hot. Suzanne Collins realized this.

So she said, “Okay, Katniss. You can have Peeta.”

Whenever I think of love triangles in YA fiction, I am reminded of a scene in Rob Thomas’ novel Slave Day in which high-school lust object Tiffany Delvoe counsels her good-girl classmate Jenny during Spanish class. Jenny is torn between her football player boyfriend who keeps pressuring her for sex, and his “nice guy” best friend who has made his willingness to be an alternative known. Tiffany compares Jenny’s triangle situation to a Communist department store: you have a choice, but it’s still the blue shoes or the red shoes. Tiffany recommends a store with more selection.

Words for young ladies to live by.

One response to “The Wisdom of the Fool Won’t Set You Free: Love Triangles in YA Lit”