Which is really just a raging case of perfectionism. I have written a new prologue to Grove, deleting a lot of the old one and absorbing the rest into the new. I have heavily rewritten parts of the first few chapters and made a few major changes to the characters and writing. There’s a good balance of what I had and what I want, and I have the first five pages that I need to submit for this Pitch Wars contest ready to rumble. Two-thirds of the novel needs editing, but it’s finished and I can edit it by the 12th when teams are announced. Entries are due by the 5th, Wednesday. Why am I chickening out now?

Perfectionism. All it really means is that it is not possible for anything to be good enough. Nothing is perfect, and to a perfectionist that doesn’t just mean “could be better”, it means “not ready”. Which means everything, forever will be not ready unless some other non-perfectionist comes along and says “hey, cool!” and grabs the thing we are obsessively fiddling with from our overly judgmental hands. My husband is often my catalyst, my non-perfectionist telling me “It’s good: turn it in, submit it, show it, get it out there. Get paid for it!” Luckily, he’s very honest, so I tend to trust that he won’t tell me something is good just to soothe the frazzled perfectionist in me. Instead, he tells me to eat something or go to bed.

Productive. What a lucky lady I am.

This does not solve the perfectionism problem. I keep telling myself that there is no harm in trying, just write the damn query already and send the three e-mails. The worst case would be that no one picks me for their team and I am back exactly where I am today, which is not so bad. Best case would be selling my novel and having extra money and more people to discuss it with. If you haven’t noticed, I am trying to talk myself out of my cowardly spell with this blog entry.

When I read the team captain’s blogs I feel like I am so ready, and when I read my novel I think it could be so much better. It’s good, and I like it, but it could be more. More exciting, more meaningful, more thrilling, more more more. 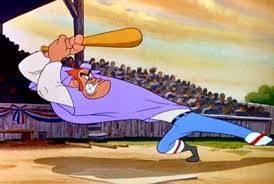 You can let those first two go by but I think I’ll swing if it’s all the same to you, Casey.

Then I go read my reviews on Goodreads and think about how I am a lot more harsh on books than most other people are. I think about how I hold myself to that same standard, a tougher one even, because I don’t cut myself any slack the way I try to remind myself to do for others. I think about people out there who might enjoy my book if they had the chance to read it. I think about authors like Maggie Stiefvater and Stephen King, and how their writing has grown and developed greater depth over the course of their careers. I think that I will grow, too.

Which probably means I shouldn’t let every single thing I write languish until the day I have grown “enough”…because I will probably never be able to identify that day.

So that was the wind up, and here comes the pitch.

4 responses to “A Case of the Cowardlies”